Light and Shadow on Geometric Forms

Considering Light and Shadow in Basic Geometric Forms
The three most useful geometric forms we are going to consider are the sphere, the cylinder and the cube.
Let’s look at these and consider the lighting situation that we normally find ourselves in.
Typically if light is coming from above and off at and angle (in these cases the light is coming from the top left), then the lightest light will be inside the form, nearer the top and nearer the left of the form.  As the various planes of the form turn away from the light, the value of the light gets progressively darker, until we arrive at a part of the form that turns completely away from the direct light source.  From that part on, the rest of the form will be in shadow.
This lighting situation is called crest lighting, and will occur far more frequently in classically lit subjects and scenes.  The second lighting situation we may encounter is called rim lighting, where, as the name suggests, the lightest light falls directly on an outer edge.
In either case, we have one part of the form in the light and one part in shadow.
When we have blocked-in our figure or portrait or still life, the next step is to map out a light and shadow pattern, and then to get that shadow area to a value #6.  This would give us a drawing that consists of a) light, and b) shadow.  The light are is the white of the paper, and the shadow area is a flat value #6.
Most students can immediately identify variations in the shadows but not so many see those in the lights.
In fact, we need to invert this thinking and “seeing”.  In classical drawing, the shadows are areas of rest.  Details here are subdued and the range of values is compressed, in favour of bringing out details and full rendering and expanded values in the lights.
As we consider our most basic geometric forms, let us identify the variations in both the lights and in the shadows.  Once identified and named, we can more easily recall the rules of each part, and apply these logically to our drawings. 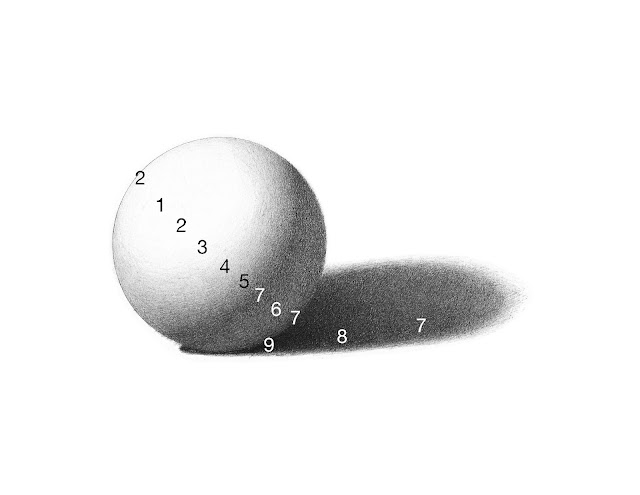 Value #1 the white of the paper will be the lightest light, the diffuse highlight and the spectral highlight.
Value # 2 following on from the lightest light, is some slight darkening of the lights, and possibly turning of the form away from us, in the lightest area (see sphere and cylinder).
Value #3 this is the light half-tone or the normal local value of the object
Value #4 this is where the light half-tone gets a bit darker so it’s the medium half-tone
Value #5 this is the dark half-tone or the turning tone of the lights are they are at their darkest, which is just before the form turns into the shadow.
All of the above would be either the white of the paper, or rendered in gradations with a 2H and then HB in the darkest half-tones
When we render the lights, we should work with pencil strokes that follow the basic geometric form and work from the darkest part towards the light with gradations of tone that are getting perceptibly lighter.
Form Shadows
The shadows were originally set at a value #6.
Eventually we will need to make those variations in the shadows, so here is an brief explanation of what we see:
Value #7 is right on the edge where the light and the shadow meet.  This is sometimes referred to as the “bed-bug line”, or the “terminator line”, or simply “the terminator”
Just past our bed-bug line is the core of the shadow and reflected light, which would be our original value #6.
That is followed by some turning tone in gradations which might lead us to a value #7.5 or 8.
On the ground plane is the cast shadow.
Cast Shadows
Cast shadows have their own rules.
Firstly, they are darkest nearest the form casting the shadow (value #9) and then get lighter the further away they are from the form casting the shadow.
They have an edge or an outline, which is sharper and darker nearer that original form, and this outline gets lighter and more diffuse the further we go from that form.
In addition to this, just outside of the cast shadow is a penumbra.  This is an extra secondary and lighter shadow that becomes more visible and more diffuse the further we get from our original form
Occlusion Shadow
The last kind of shadow is the “line” right under the form.  This anchors the form to the ground plane.  It is called the occlusion shadow or proximity shadow.  This occlusion shadow is the darkest shadow and occurs at the point of contact of the form with the ground plane.  It often leads into the cast shadow. 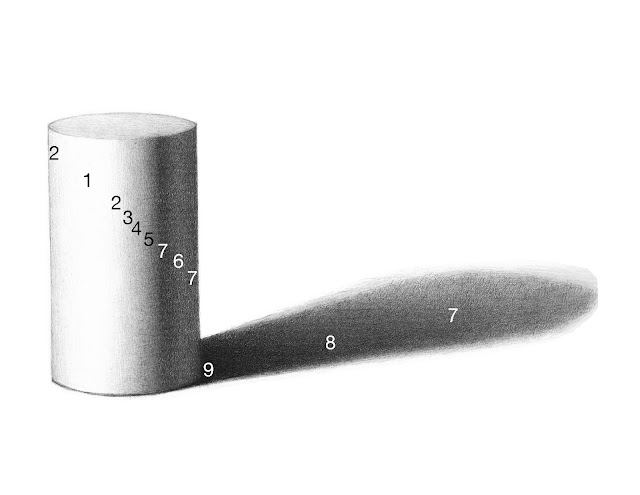 As can be seen, in these drawings, the space occupied by value #1 and #2 are fairly even, and then 3, 4 and 5 occur in rapid succession.  This is because the light diminishes at an exponential rate as the form turns away from the light source, and heads towards the shadows. The dark rim directly under the cylinder is the occlusion shadow.  On the perimeter of the cast shadow is the penumbra. 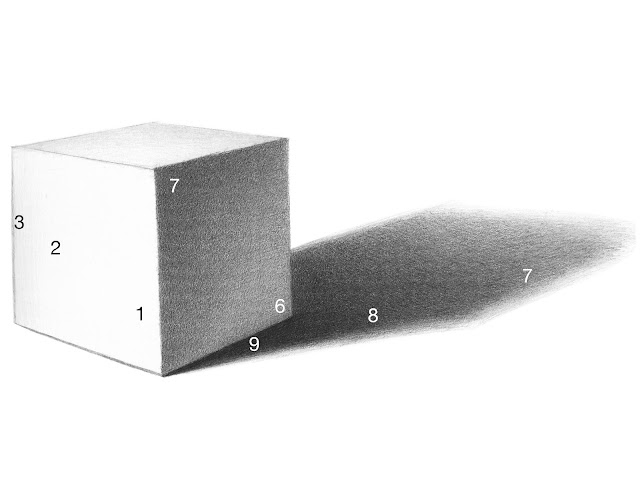 In this cube, the lights are very light, only using values 1 through 3, and then the form of the cubes turns a sharp corner into the shadows.  The shadow directly under the cube is the occlusion shadow.