Stages of a Portrait Drawing

The method for drawing the portrait in Classical Realism begins with the big overall general statement, and then focuses on planal forms, and lastly hones in on surface detail. The process employs layers of graphite, and several steps, which each take us to ever-increasing  levels of refinement and sophistication.

I am using as reference, a detail from a painting by Pietro Annigoni.

Spend the first five minutes observing the model, and make some measurements for proper placement of features and structural elements.

We start the block in of our drawing.  Mark the top and bottom, and, with a knitting needle, measure the largest width of the entire head in relation to the largest height of the head.  Mark the left and right of the drawing, and assess that the head will be correctly placed on the paper.

Using sketchy-ghosty lines, we block in the envelope of the head.  This includes all the hair, and should show us the general tilt and orientation of the head. 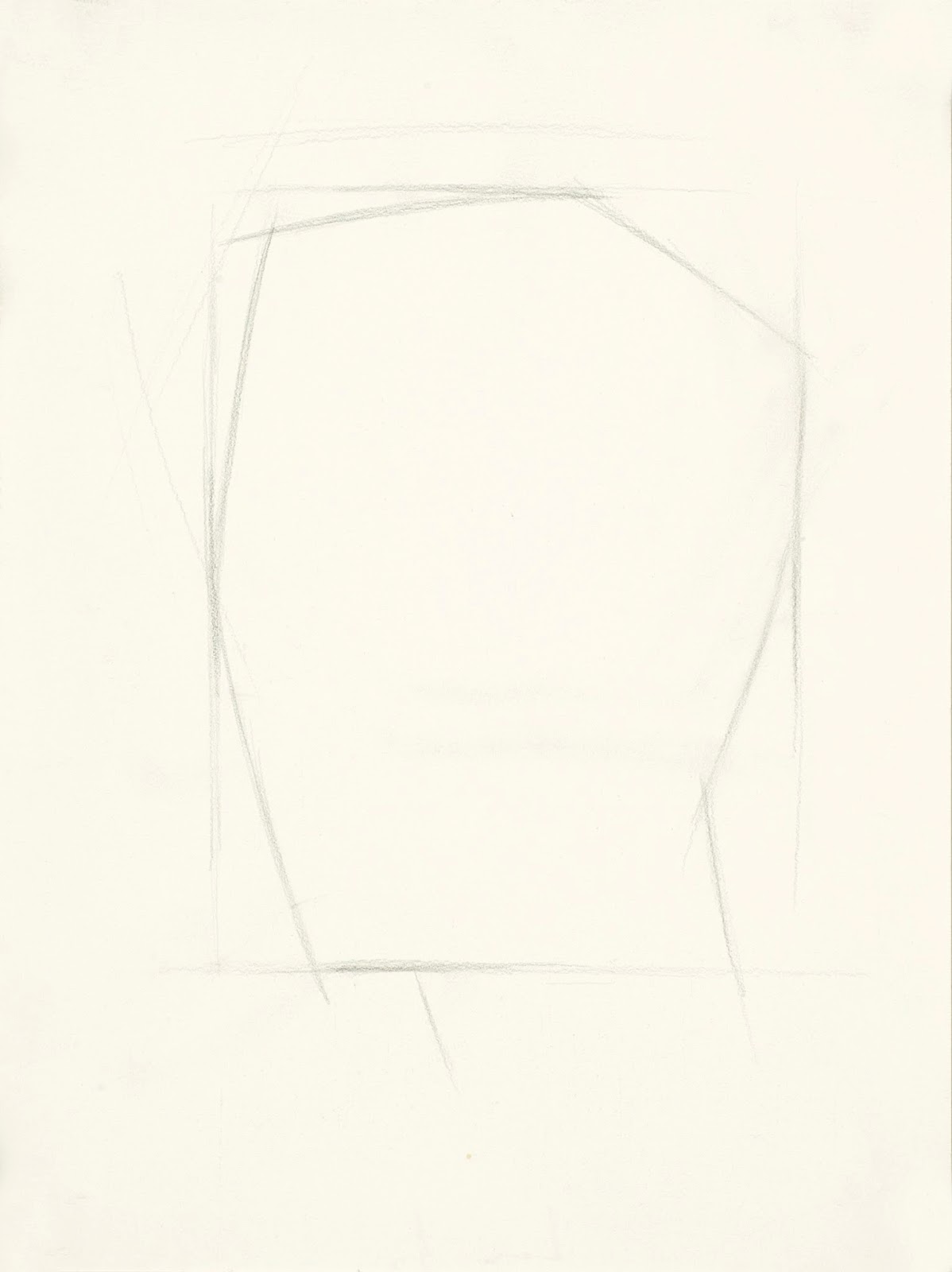 The construct stage is fairly quick, but crucial.  We observe where the centre line of the features is.  That is a construction line that passes through the glabella and the philtrum.  This line gives us the axis of the head.

All of our feature lines will generally be parallel to each other, and perpendicular to the centre line. 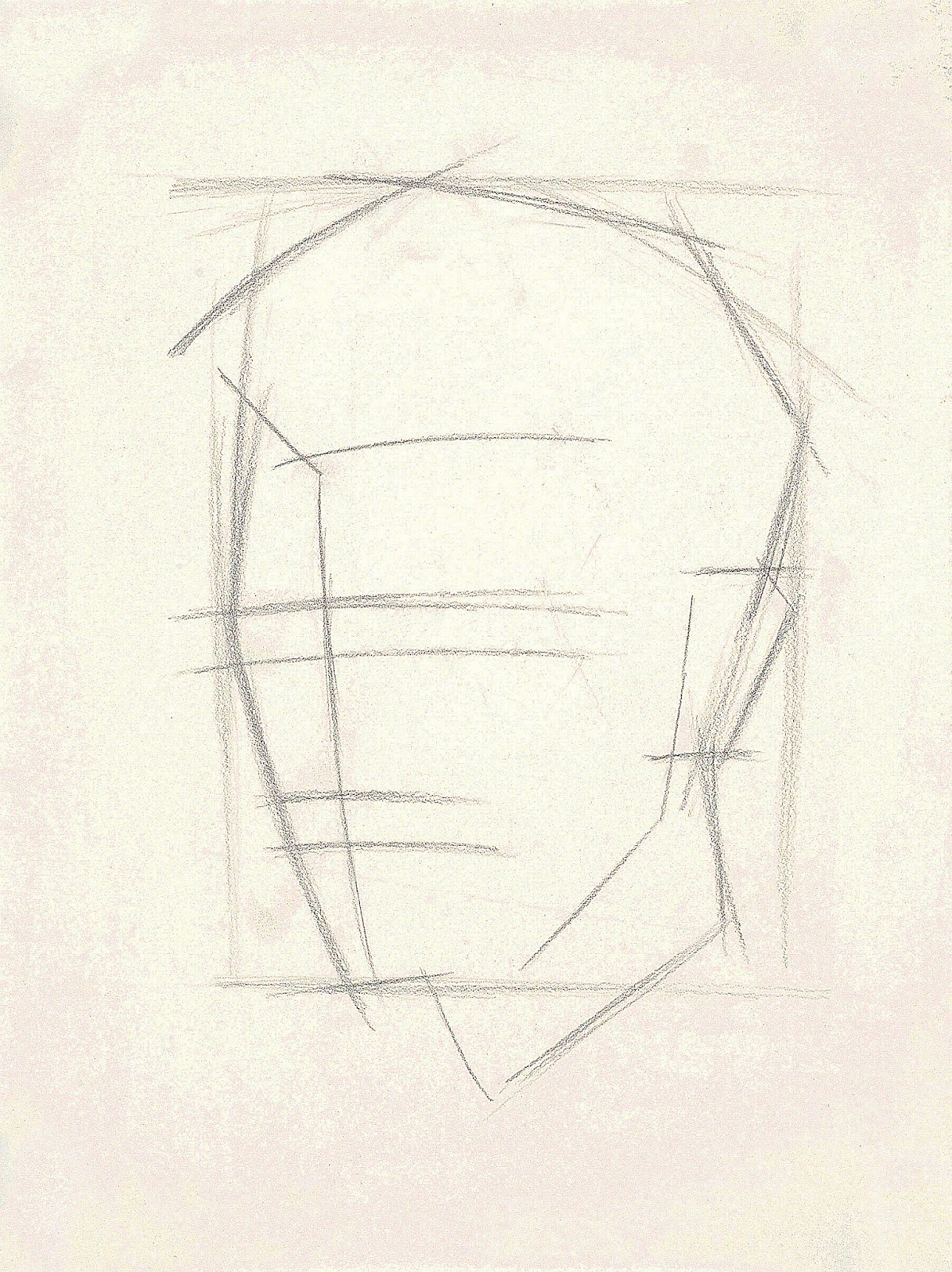 Just as we blocked-in the outer contours in a general fashion for the first stage, this is the stage where we block-in the general idea of where the shadows will go, and then place a light tone in the shadow areas.  This tone can be #2, or #3 value. 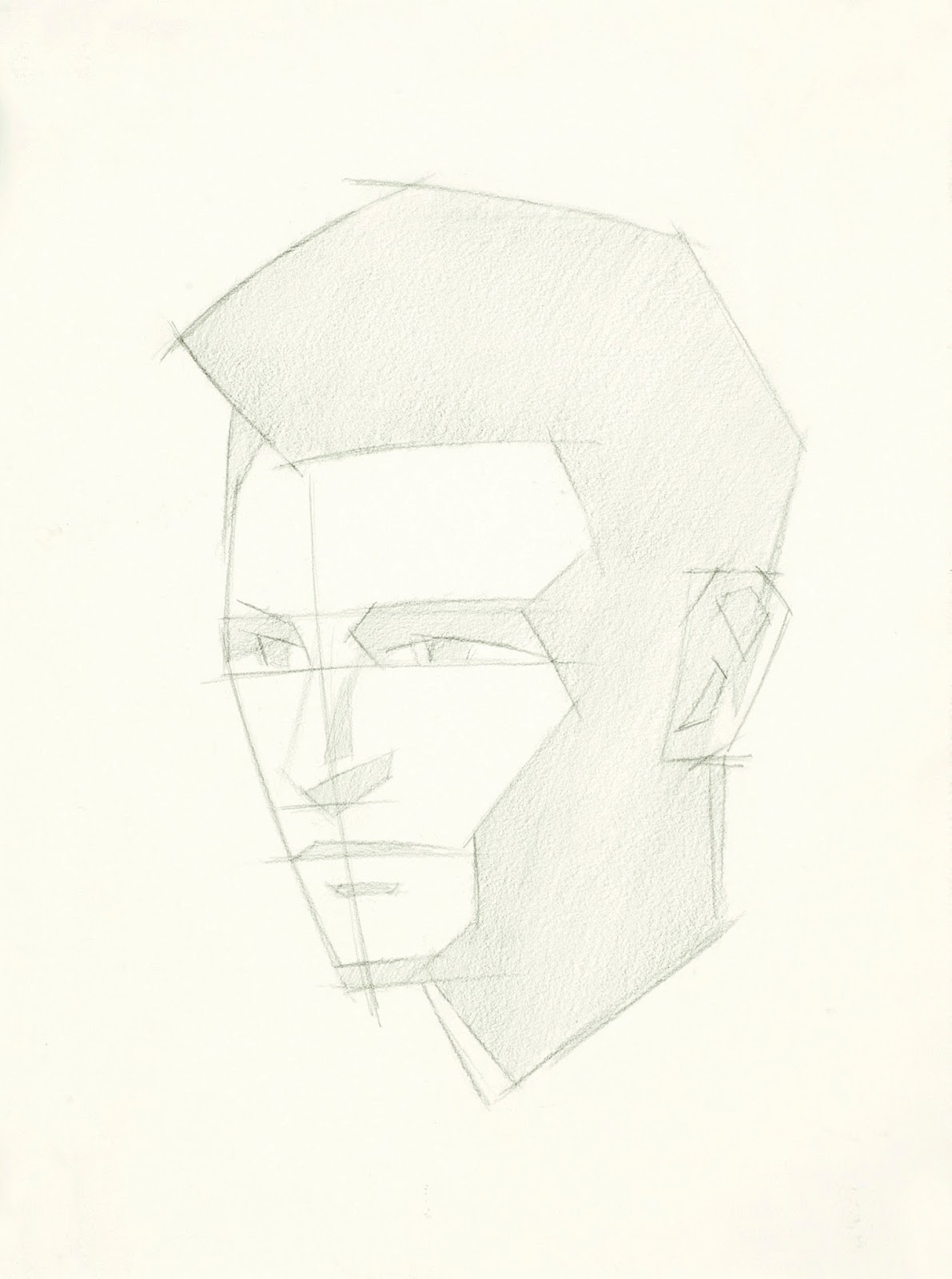 We are now in a position to judge all our shapes better, because of the light tone placed into the shadow areas.  The drawing has moved from a general line drawing to one that is concerned with masses.

Once those major corrections are done, we can now go through form by form, with all the smaller undulations of the shadow areas, and their corresponding light areas.  We make those smaller articulations, and tone in that shadow area darker, to a value #5 or #6.

In this stage we are creating a two-tone light-and-dark silhouette.   The two tones are the white of the paper for the lights and the #5 or #6 of the shadows. 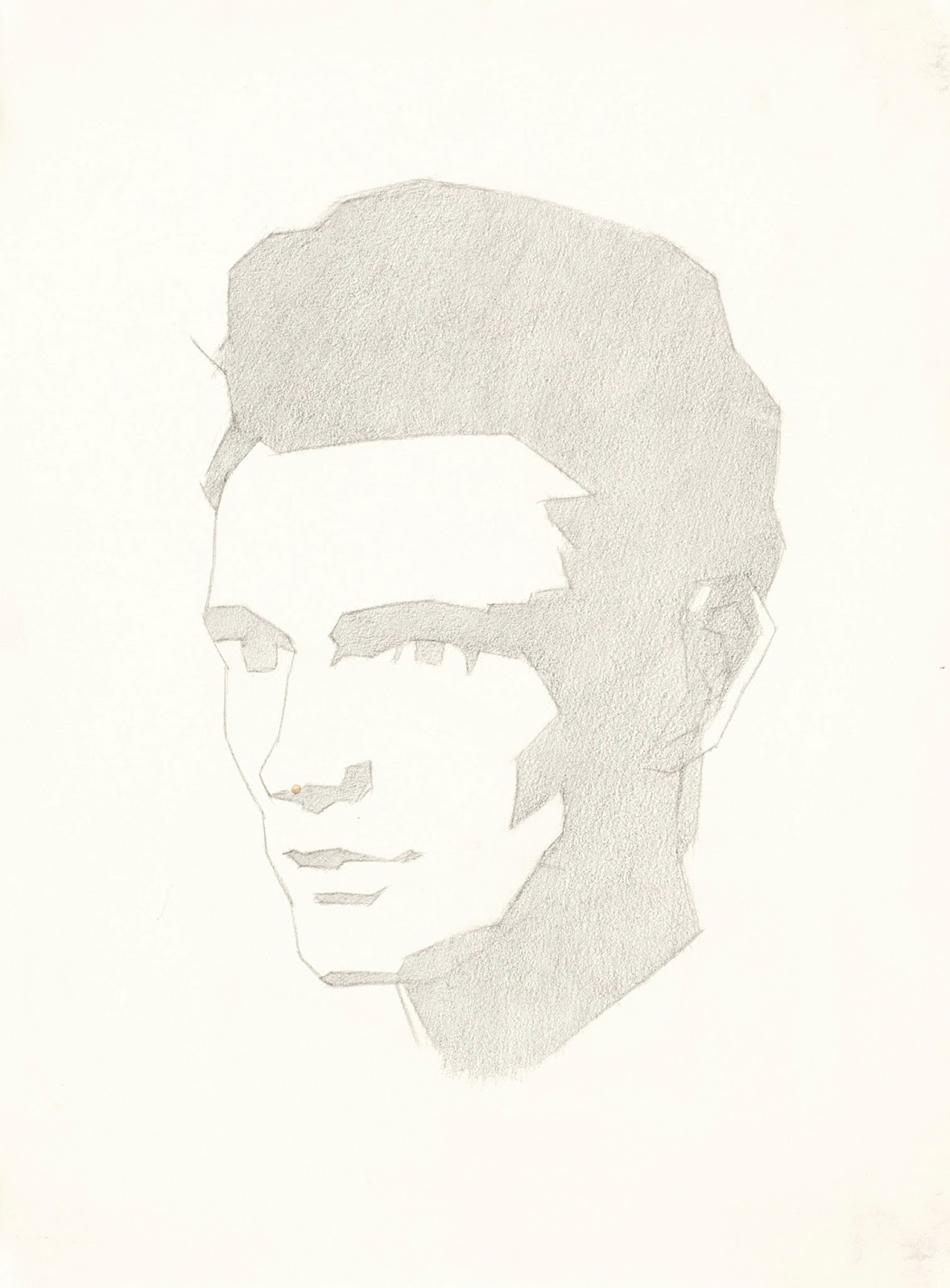 5. The Grouping of the Darks

This stage is concerned with keying the darkest areas of the portrait.  On a dark-haired model, this would typically consist of the hair in shadow.

Also, if we are drawing a model in dark clothing, the areas of shadow may need to be toned in darker again than the original value #5 or #6.

We now have a drawing that still has a graphic look to it, but consists of three values: the white of the paper, the #5 or #6 for face in shadow, and #8 for hair or dark clothing in shadow. 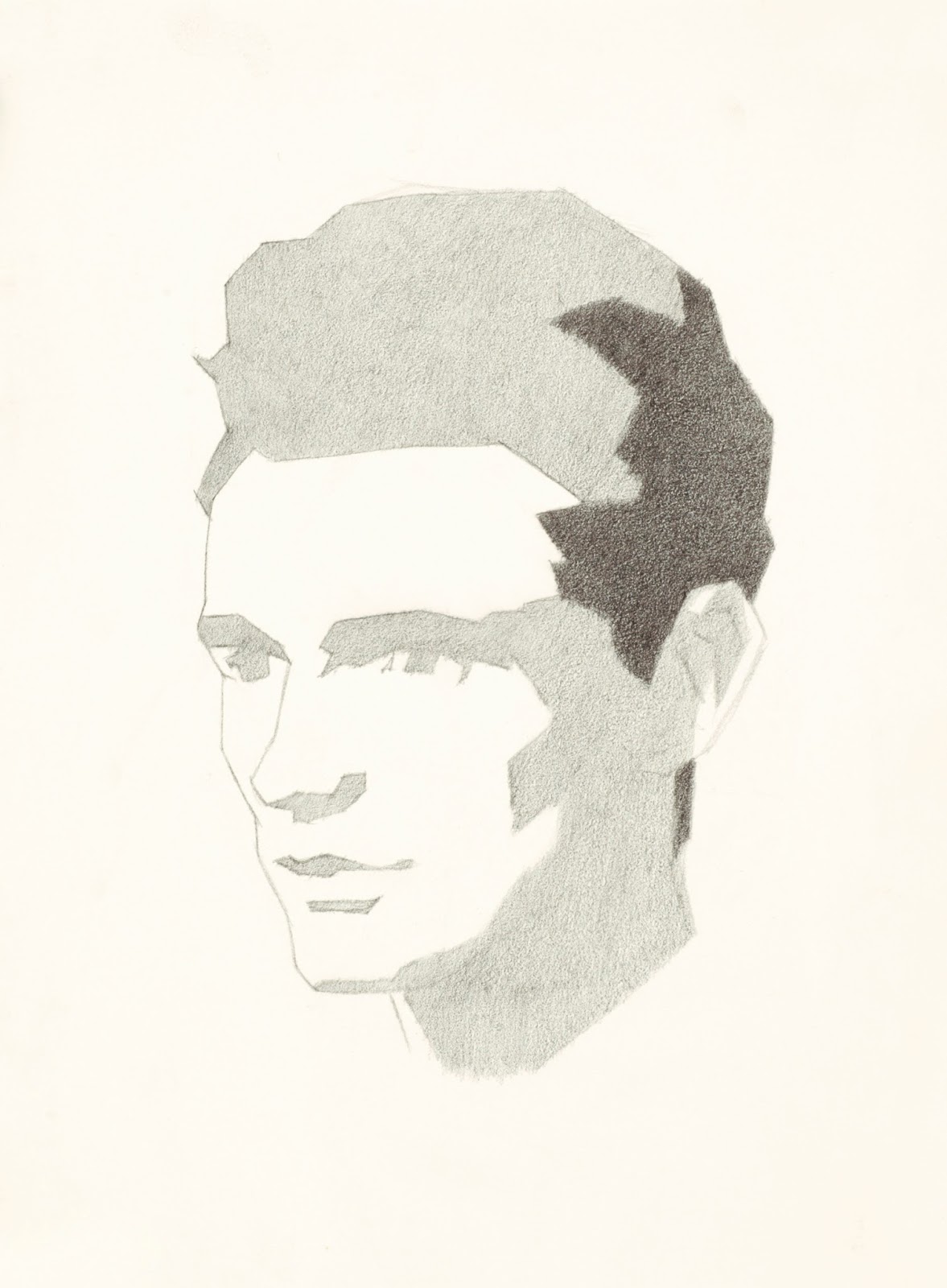 This stage is also conceptual in nature.  We should understand our guiding principle, that we always work from the biggest form, the biggest idea, the most general statement to smaller and smaller ideas, forms and details.

In this stage therefore, we need to step back from the notion that we are drawing all the details of the model in front of us, and engage our conceptual brain, that is going to see each part of the model in its most basic geometric form.

Once again, we are concerned with creating a context in our lights (not the shadows).

We will model the head as an elongated sphere or egg shape, and the neck as a cylinder and the shoulders as a block.

This stage changes the graphic look of the previous stages to one of a volumetric statement. 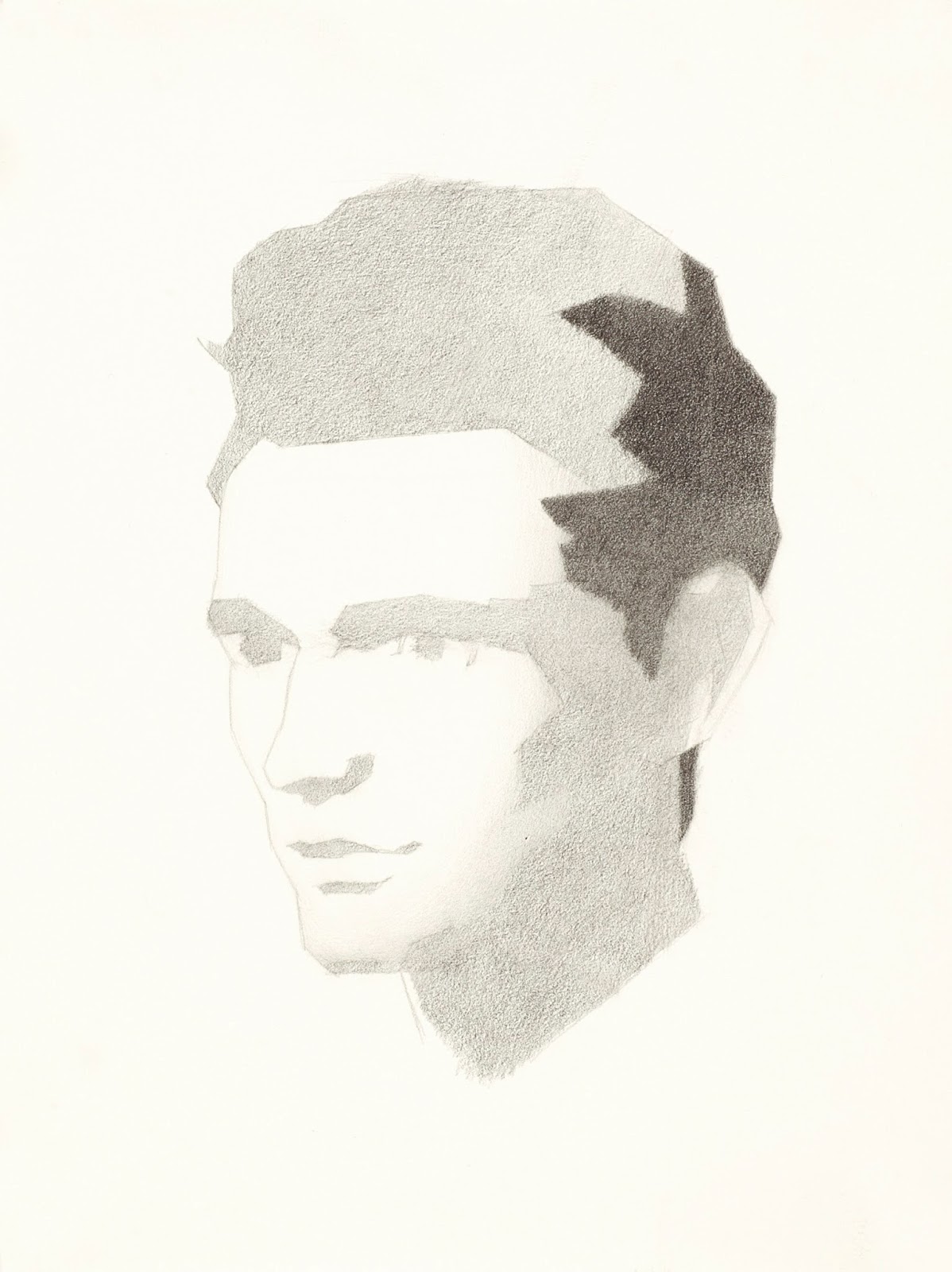 7. Variations of the Darks

Now that we have established the context for our lights, we turn our attention back to the shadows.  In this stage, we aim to bring all our shadows to a complete finish.

We deal with the absolute darkest areas first, that is the hair in shadow.  Then we move to the bed-bug line and the turning of the outside form away from us. In a portrait, there are important variations in the dark areas, because these will by and large be the definition of the eyes, nose, lips, chin, ear, jawline and cheek bones.

The tonal range in the darks should be minimized, so that the viewer’s eye is less drawn to the shadows.

Reflected lights should not be erased out of our initial shadow value, but rather, they should simply appear by virtue of the darkening of surrounding bed-bug lines, turning of the form and cast shadows.

We should pay special attention in differentiating form shadows and cast shadows and use the rules which govern each of these separately.

And we should look for opportunities to include lost edges, and soften edges where edges need to recede.

Try to simplify the darks as much as possible. 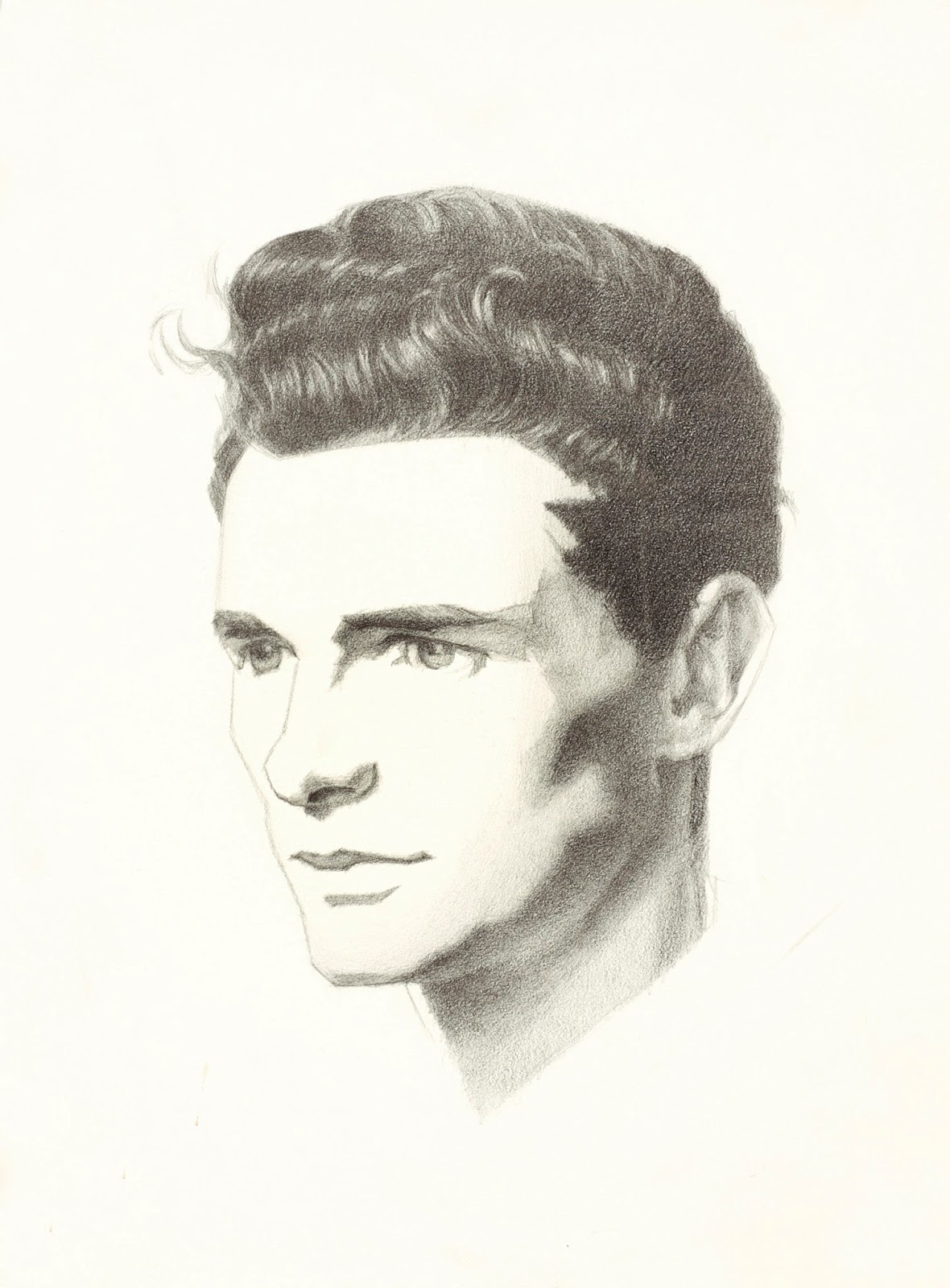 8. Rendering of the Lights

This is the final stage of the drawing, and should be the stage in which time slows down, and we focus on rendering in order, the biggest forms, the medium forms, the small forms, the micro forms and so on.

Since we have already established the general context of the lights, it’s a good strategy to develop and render each form, segment by segment, to a complete finish.

In rendering these forms, we need to be delicate and subtle, and maintain the dominance of the governing larger volumes and the planal structure of the head.  Small details must always be subject to fitting into a larger context.  For each form and subsequent smaller and smaller forms that are rendered, we need to turn those forms and ensure that within its own context each form has a light, a mid- and a dark value to create the illusion of volume.

In this way we can convey the entire breadth and complexity of the portrait in one drawing. 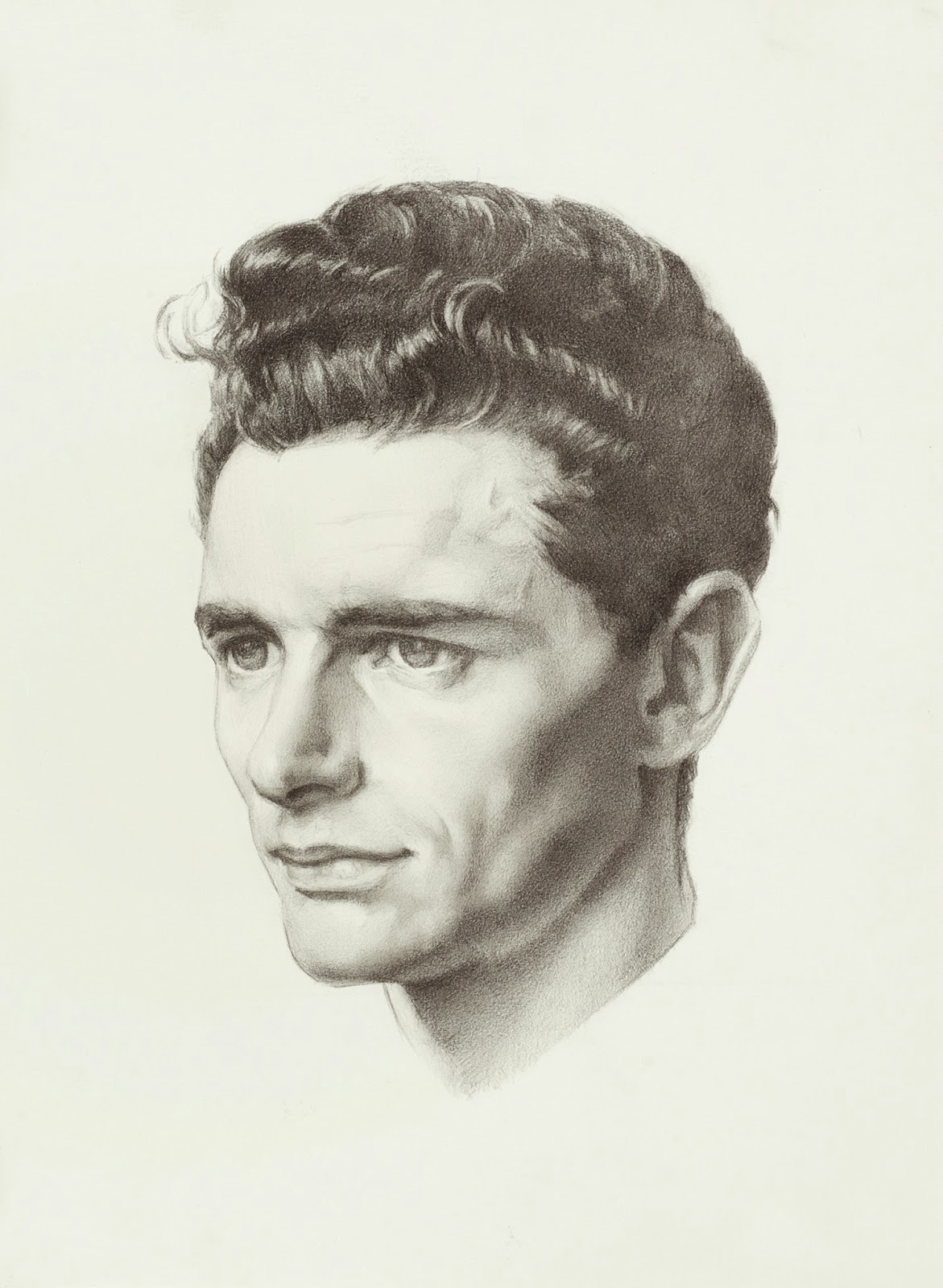